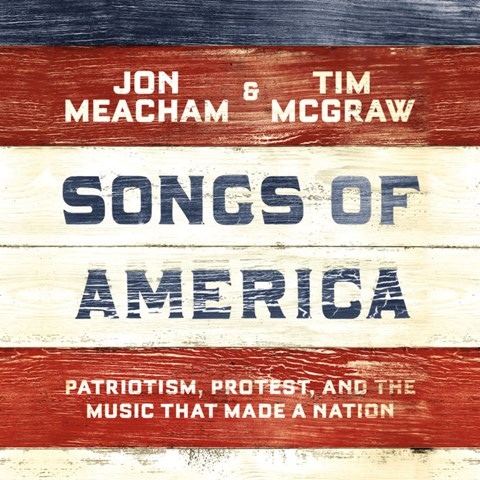 SONGS OF AMERICA Patriotism, Protest, and the Music That Made a Nation

The best songs can match the best of any art in their ability to move people and preserve the feelings of a moment. Jon Meacham and Tim McGraw, narrating their own words, demonstrate this with a selection of political and protest songs both familiar and unfamiliar. Meacham covers the historical context, while McGraw reads many of the lyrics and comments on how some of the songs work and, often, on their personal meanings to him. Both are thoughtful and interesting, and they cover songs from all over the political spectrum. Oddly, though, while the audiobook includes a number of instrumental versions in the background, there are no vocal renditions by either of the authors, so we must look elsewhere to know what the songs sound like. D.M.H. © AudioFile 2019, Portland, Maine [Published: AUGUST 2019]