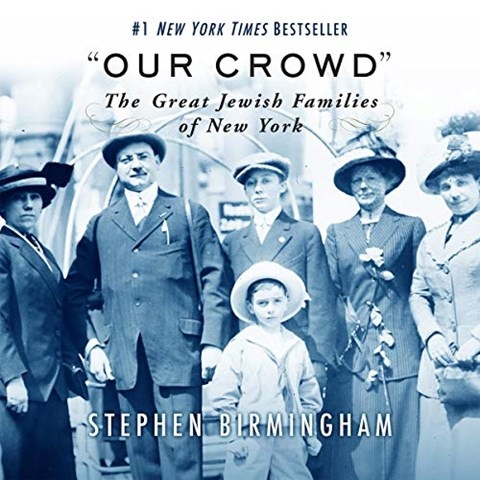 "OUR CROWD" The Great Jewish Families of New York

Narrator Mel Foster enthusiastically delivers this history of New York German-Jewish merchant/banking families, including the Seligmans, the Lehmans, and the Goldmans, which was originally published in 1967. A rich atmospheric picture of this close-knit, family-centered society, later known as "The 100" or "Our Crowd," is evoked by Foster's warm tone and conversational pacing. Listeners are transported to the early nineteenth century as Foster portrays the humble origins of several ambitious young Jewish men who emigrated from Germany and, along with their male relations, peddled goods all over America. Touches of humor come through in Foster's rendering of the practices and routines of these businessmen and their socially conscious wives. An evocative portrait of a segment of American society, well told and narrated. M.J. © AudioFile 2019, Portland, Maine [Published: AUGUST 2019]