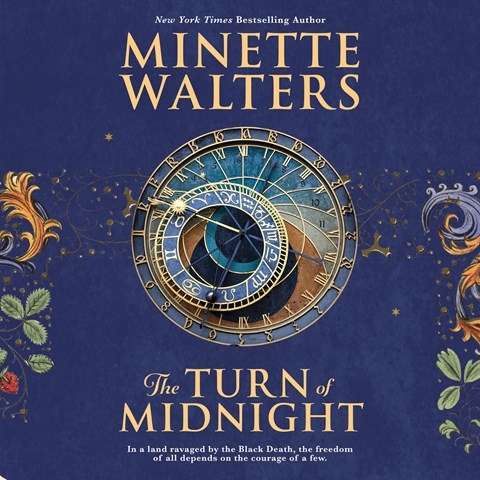 THE TURN OF MIDNIGHT

In this sequel to THE LAST HOURS, narrator Helen Keeley tells listeners in her rich, clear voice about the intrigue and conflict in Dorset following the worst of the Black Death in 1349. The earlier historical novel followed the progress of kindly Lady Anne as she saved the people of her manor from the pestilence by keeping outsiders on the other side of the moat and by killing rats. Keeley's narration is authoritative, fast paced, and precise. Her characterization of Lady Anne gives listeners a compassionate, intelligent leader who continues to argue for her progressive policies against the forces of greed, prejudice, and ignorance. Other characters are also well depicted. This audiobook will appeal to listeners looking for an engrossing expedition to the dark and dangerous days of the fourteenth century. D.L.G. © AudioFile 2019, Portland, Maine [Published: OCTOBER 2019]