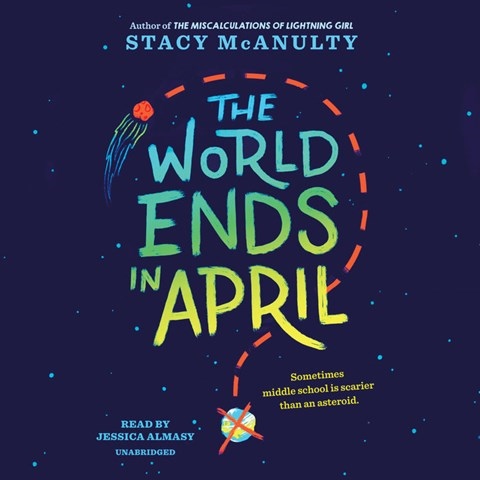 THE WORLD ENDS IN APRIL

Narrator Jessica Almasy expresses the annoyance and frustration of middle schooler Elle, whose Grandpa Joe runs drills all too often to prepare for the end of the world. Then Elle discovers a credible scientist who predicts an asteroid will hit earth in a few months. Almasy emphasizes the tension in the story's timeline, increasing the intensity with Elle's growing fears. Almasy is gifted at portraying Elle's many relationships--her unease with the conflict between her grandfather and her incredulous father, her distrust of a frenemy, and her fear of losing her friendship with Mack, whose blindness seems much less a disability than Elle's discomfort with peers. Almasy's strongest portrayal is of Elle herself. To become a leader, she must learn to speak up for herself. S.W. Â© AudioFile 2019, Portland, Maine [Published: SEPTEMBER 2019]