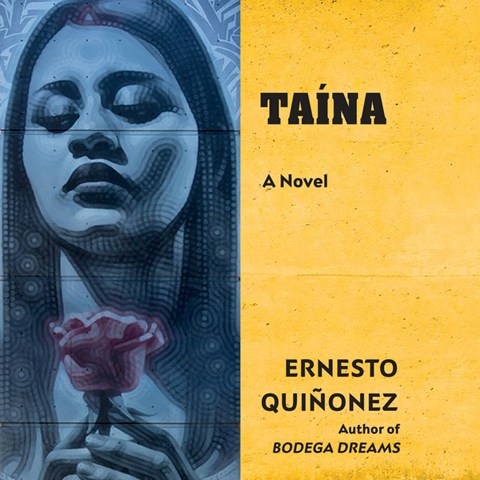 Narrator Daniel JosĂ© Molina's affectionate interpretation of QuiĂ±onez's novel rings with truth. QuiĂ±onez should be on everyone's list of authors to know. In his riveting portrait of contemporary life in the projects of Spanish Harlem, he creates distinctive, indelible characters. Fifteen-year-old Taina Flores is pregnant. She claims she's a virgin. Her mother believes her. She's sure Taina was visited by angels. Molina sounds exactly like the storyteller, a 17-year-old neighbor named Julio, a boy with visions and a deep love for Taina. Molina's portrayals of Taina's uncle, El Vejigante, an eccentric ex-con; Julio's parents, a Marxist father and a Jehova's Witness mother; and Taina herself, a foul-mouthed teen with an angelic voice, are completely satisfying. Graceful writing and a superb performance make this choice listening. S.J.H. Winner of AudioFile Earphones Award Â© AudioFile 2019, Portland, Maine [Published: NOVEMBER 2019]