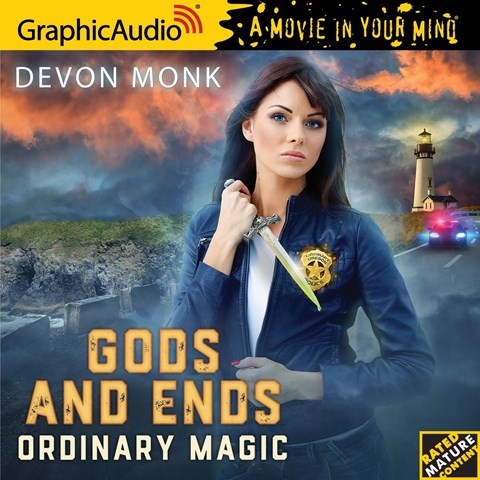 by Devon Monk | Read by Colleen Delany and a Full Cast

Narrator Colleen Delany gives Police Chief Delaney Reed a snarky attitude and a soft voice. Delaney patrols the quiet streets of Ordinary, Oregon, which is inhabited by gods, mythical creatures, and humans, of course. She teams up with her old friend, vampire Ryder Bailer, performed with aplomb by Henry Kramer, to capture and kill an ancient vampire who wants the book of dark magic. In the midst of their quest, Bathin, portrayed in silky tones by Danny Gavigan, captures Delaney's mortal soul. This tangle of love, quest, and conflict is aided by vacationing gods. The versatile cast gives the characters their own personalities while subtle background music and sound effects bring this tale of magic to life. M.B.K. © AudioFile 2020, Portland, Maine [Published: APRIL 2020]