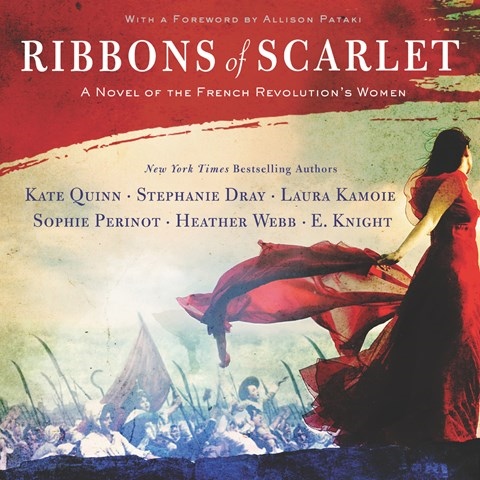 RIBBONS OF SCARLET A Novel of the French Revolution's Women

Six experienced performers portray the women who are featured in these interwoven novellas of the French Revolution. They use unaccented speech for the narrative and a subtle French accent for the dialogue--with the exception of the last two chapters, in which the French accents are harsh and brittle. In "The Philosopher," Sophie de Grouchy de Condorcet is portrayed as an idealist. In "The Revolutionary," Louise Audu, a rough-voiced fruit seller, is contrasted with soft-spoken "Princess" Elisabeth, the pious sister of Louis XVI. Manon Roland is portrayed as steely in "The Politician," while in "The Assassin," Pauline Léon, is coldhearted. Finally, milie de Sainte-Amaranthe, in "The Beauty," recites her story in sharp, increasingly hysterical tones as she faces Madame Guillotine. These are spellbinding tales of the French Revolution from its inchoate beginnings to its bloody and terrifying end. M.B.K. Winner of AudioFile Earphones Award © AudioFile 2020, Portland, Maine [Published: JANUARY 2020]