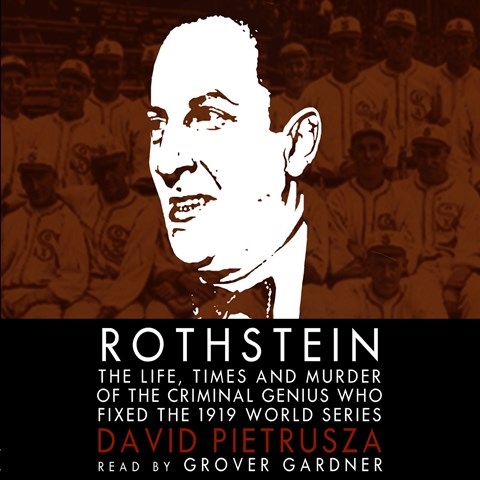 Dazzling! ROTHSTEIN is nonstop fiery journalism, finely researched and colorfully written, read with truly impressive panache by the inimitable Grover Gardner. Gardner tears into the material with vigor and intelligence, a knowing insider’s edge, and a smirk in each syllable. His style here is reminiscent of period radio announcers, conjuring vivid images of the streets and denizens of old New York in every breath. Be prepared for over fourteen hours of scintillating history that reveals the rampant corruption and indelible characters of the times. Arnold Rothstein grew from a rebellious Jewish boy of the tenements to one of the most influential and conniving criminal minds in history. His intricate rigging of the 1919 World Series was a gem, but Rothstein, clearly an obsessive-compulsive gambling addict, engineered some of the biggest scams, criminal networks, and graft systems ever known in America. Like many of his ilk, his personal life was a tragedy, and Rothstein surely shared the wealth. A must listen, must own audiobook. D.J.B. Winner of AUDIOFILE Earphones Award © AudioFile 2004, Portland, Maine [Published: JUN/ JUL 04]