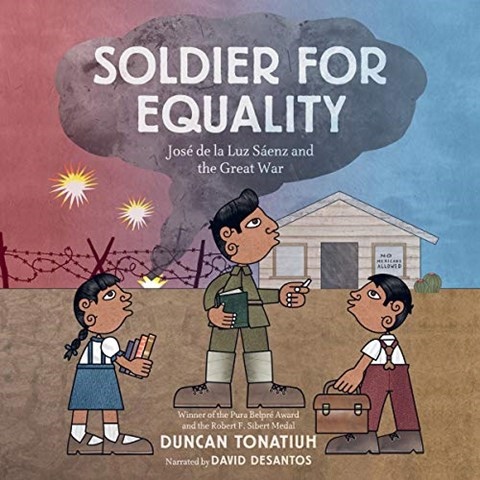 With Spanish words and phrases rolling off his tongue, narrator David DeSantos immerses young listeners in the life of Mexican-American José de la Luz Sáenz. Luz took to heart his father's admonition to be proud of his roots and who he was. As a teacher and later when he was in the Army during WWI, he urged his students and then his fellow soldiers to do the same. DeSantos briskly delivers Luz's wartime accomplishments, emphasizing Luz's dismay at discrimination against Mexican-Americans in the service. Upon his return, he continued to champion equality and in 1929 founded the League of United Latin- American Citizens. The production concludes with an extensive author's note, a source list, timelines, a bibliography, an index, and a glossary. A.R. © AudioFile 2020, Portland, Maine [Published: FEBRUARY 2020]