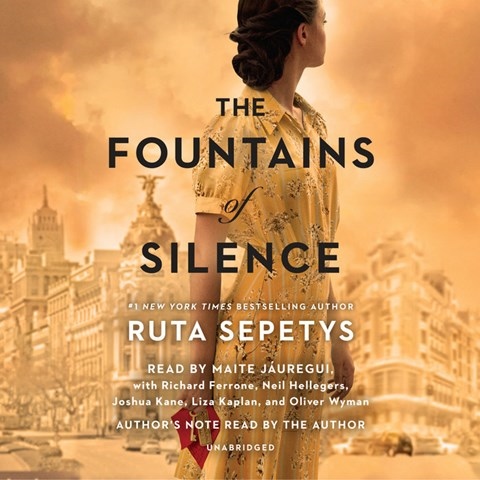 THE FOUNTAINS OF SILENCE

This harrowing yet hopeful story of young people caught in the midst of Spain’s fascist regime in the 1950s is superbly rendered by Maite Jáuregui and an ensemble cast. With excellent Spanish, Jáuregui— who does not sound like a native English speaker—uses her mesmerizing vocal tones and unhurried pacing to infuse the audiobook with all of its inherent pathos. The love story between aspiring photojournalist Daniel, a wealthy Texan teen visiting Madrid with his parents, and Ana, a young hotel maid who is the daughter of executed anti-fascists, slowly uncovers the terrifying underbelly of Spanish life under fascist rule. Official documents and news clips, read by the cast, set the political context. An extensive author’s note, delivered by the author, rounds out this engrossing production. S.G. Winner of AudioFile Earphones Award © AudioFile 2019, Portland, Maine [Published: NOVEMBER 2019]