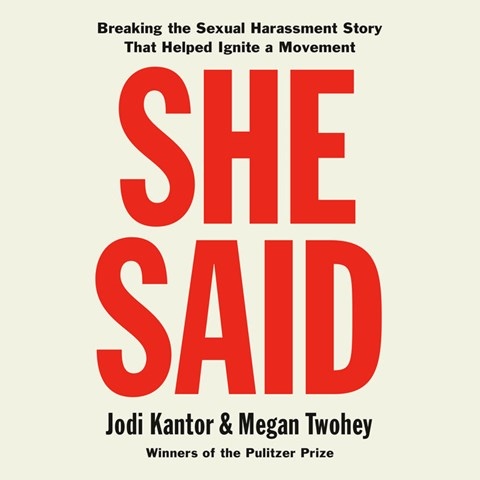 The #MeToo movement gains a firsthand account from Kantor and Twohey, reporters who were at the center of investigating Harvey Weinstein and his transgressions and also were involved with recounting the allegations of Christine Blasey Ford in the lead-up to the Brett Kavanaugh Senate Confirmation Hearings. Narrator Rebecca Lowman's even delivery and enunciation style can sound too stoic, or even laconic, at times for these highly emotional stories. Though her soft, slightly nasal voice maintains the listener's attention, particularly during confrontational scenes, such as those between the authors and Weinstein, her use of tonal variety overall is inconsistent. Nonetheless, the authors' discussion of the challenges they faced in uncovering these stories and their observations on the manipulation and maligning of the victims will keep the listener's attention. L.E. © AudioFile 2020, Portland, Maine [Published: FEBRUARY 2020]