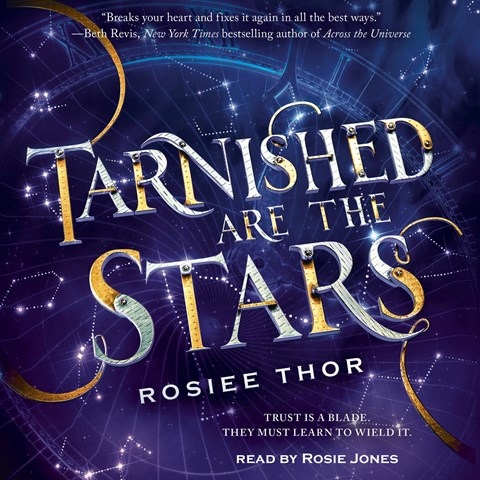 TARNISHED ARE THE STARS

Rosie Jones's upbeat and rousing narration is a delightful addition to this thrilling futuristic story of three unlikely teens who join forces. Together, they overthrow the tyrannical Commissioner and the Queen of Earth Adjacent--humanity's anti-technology planetary settlement. Jones's voice is confident and bruising as Anna, an outlaw and tech smuggler who lives in a secret village where everyone depends on illegal clockwork hearts to survive. She finds herself unwittingly arrested by the Commissioner's son, whose apprehensive and soft-spoken nature is perfectly explored on audio. They are joined by Eliza, the Queen's fierce undercover spy, who catches Anna's attention. In addition to giving voice to Eliza and Anna's instant chemistry, Jones easily picks up on the sparks of humor that make this adventure a fun, immersive listen. J.E.C. © AudioFile 2019, Portland, Maine [Published: DECEMBER 2019]