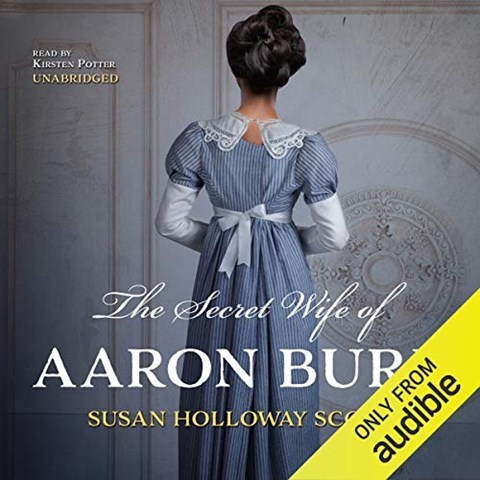 THE SECRET WIFE OF AARON BURR

In a performance filled with restrained rage, Kirsten Potter portrays Via, a 7-year-old Tamil girl, the product of her mother's rape by a British soldier, who is sold into slavery. Her final owner, Colonel Prevost, renames her Mary and presents her to his wife, Theodosia. "Mary" grows into a woman with a strong sense of personal identity. Theodosia begins a torrid affair with young Colonel Aaron Burr, who also forces his sexual attentions on Mary. Burr continues to demand Mary's presence in his bed even after marriage to Theodosia. Potter makes Mary's helplessness and confused feelings toward Burr starkly real. She skillfully conveys the dangerous nature of the Mary/Burr relationship, in the process revealing the jealousies, duels, and double-dealings of our Founding Fathers. S.J.H. © AudioFile 2019, Portland, Maine [Published: NOVEMBER 2019]