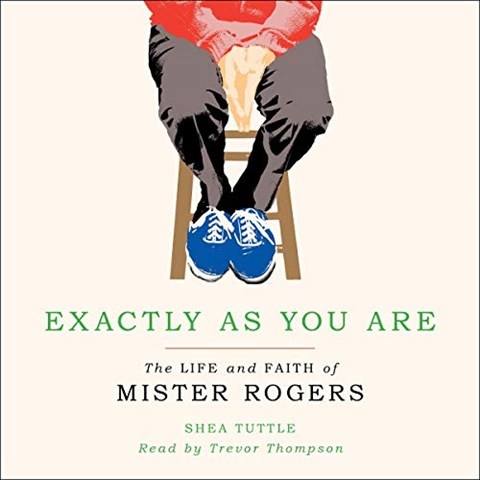 EXACTLY AS YOU ARE The Life and Faith of Mister Rogers

Narrator Trevor Thompson's deep voice isn't one that listeners would associate with Mister Rogers, at first. However, he softens his tone to read quotes from the famous puppeteer and children's show host. Thompson also uses a singsong voice to read lyrics from Rogers's show, including the song that gives the audiobook its title. Rogers, who was ordained by the Presbyterian Church, described his TV show as a ministry. Shea Tuttle takes that aspect of Rogers's career seriously, finding connections between his songs and the psalms he sang in church. Tuttle sees Rogers's message of love as gospel, at times referencing Bible passages in telling his life story. Tuttle finds lessons of faith but ultimately praises Rogers for work that embraced the wider world. J.A.S. © AudioFile 2020, Portland, Maine [Published: FEBRUARY 2020]