Home»Reviews»ALL THE WAYS WE SAID GOODBYE 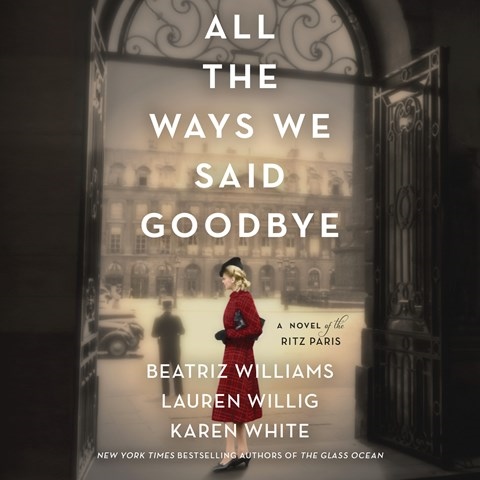 Three spectacular narrators perform this captivating adventure with Paris' Ritz hotel at its center. In 1964, Babs leaves the English countryside for Paris to find "La Fleur," a French Resistance fighter. In 1942, Daisy helps her grandmother, a Ritz resident, with her wartime efforts as a courier. In 1914, Aurelie leaves the hotel's safety and is trapped on the wrong side of the front. Ties between the women unfold, with the two world wars marking time. Nicola Barber is properly English as Babs; her composed, even tones during the day contrast with the slurred words of her drunken nights. Saskia Maarleveld's Daisy has a soft, wavering, which is replaced by seductive and playful tones as she finds her footing in various missions. Helen Sadler depicts Aurelie's pride in a confident and unwavering timbre. A.L.C. © AudioFile 2020, Portland, Maine [Published: MARCH 2020]