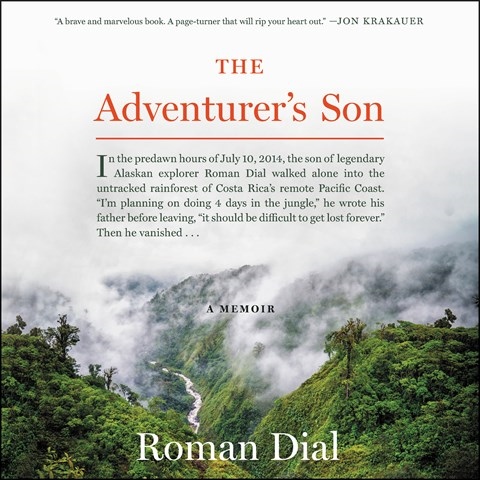 THE ADVENTURER'S SON A Memoir

Narrator Fred Sanders's understated performance is fitting for Roman Dial's memoir of searching for his son, Cody, in the dense Costa Rican jungle. Roman had always been adventurous. He climbed barely mapped Alaskan peaks in college, took 6-year-old Cody on a sixty-mile hike across a nearly uninhabited Aleutian island, and allowed his children to handle wild critters in Borneo while on a research trip. He describes it all with quiet pride and little drama. When Cody doesn't return from Corcovado National Park after entering it illegally without a guide, Roman spends two years doing repeated treks with friends, miners, poachers, and police trying to find him. Sanders adeptly channels Roman's roller coaster emotions of soaring hope and plunging despair as well as his steadfast belief that Cody would not be involved with local drug dealers. A.B. © AudioFile 2020, Portland, Maine [Published: APRIL 2020]