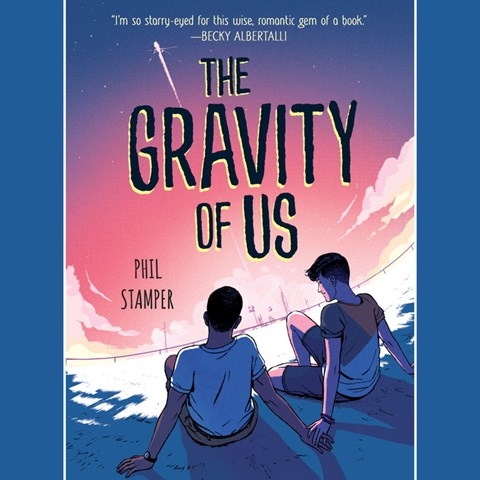 THE GRAVITY OF US

by Phil Stamper | Read by Michael Crouch and a Full Cast

Narrator Michael Crouch's expressive, youthful voice is pitch-perfect for Cal Lewis, an ambitious teen journalist and social media influencer who is uprooted from Brooklyn and dropped into suburban Texas when his dad joins NASA's mission to Mars. The Mars mission has captured America's imagination, thanks to "Shooting Stars," a reality show that is realistically presented to listeners in highly produced segments that feature upbeat musical cues and a stunning full cast of narrators. Jonathan Davis's poised performance as a duplicitous reality show host--whom Cal plans to expose--is an absolute standout. Even with the full cast, Crouch is never overshadowed, and his singular performance is filled with the emotional highs and lows the NASA families face as they look to the stars in this unique audio production. J.E.C. © AudioFile 2020, Portland, Maine [Published: MARCH 2020]