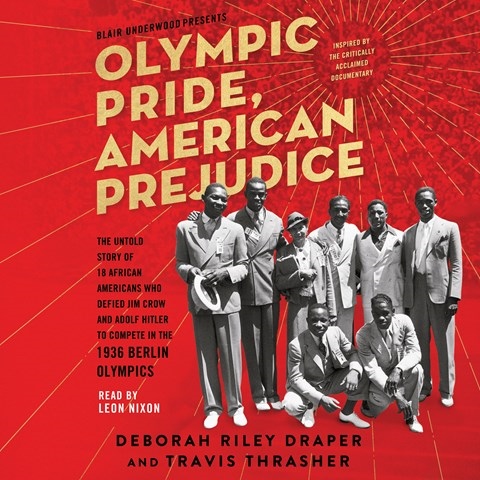 OLYMPIC PRIDE, AMERICAN PREJUDICE The Untold Story of 18 African Americans Who Defied Jim Crow and Adolf Hitler to Compete in the 1936 Berlin Olympics

Leon Nixon brings gravitas to his narration of this historic look at what African-American athletes endured in the 1930s. His steady pace, deep pitch, solid enunciation, and just the right touch of drama blanket the audiobook. Black athletes had to deal with discrimination on home soil at a time when Adolf Hitler was rising to power on a platform of intolerance and racial superiority. The stories focusing on several individuals are interspersed with a narrative on Nazi Germany's preparations to host the 1936 Summer Olympics. Nixon never imitates anyone--he just lets the words, history, and emotions speak for themselves. M.B. © AudioFile 2020, Portland, Maine [Published: MAY 2020]