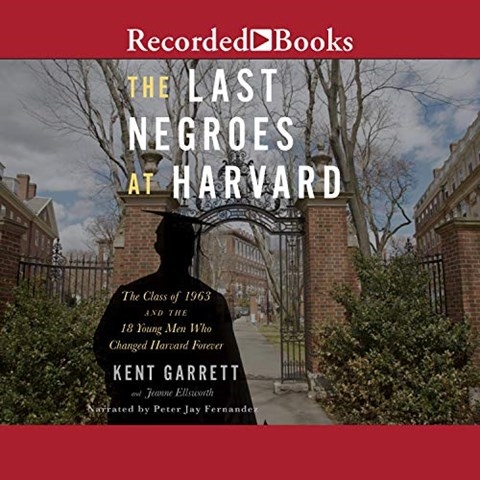 Peter Jay Fernandez's performance of this audiobook is sincere and engrossing. With impeccable pacing and an appealing deep voice, he brings to life the experiences of Kent Garrett and 17 of his classmates who entered Harvard in 1959, the largest Black freshmen class the university had seen. Garrett and Ellsworth intersperse the experiences of those young men at Harvard with extensive interviews about their lives many decades later. It's a fascinating mix of the momentous and the wry. The young men sat at "the Black table" in the dining hall, debated integration after Malcolm X visited campus, and were introduced at parties to a rare Black female student. They entered Harvard as Negroes and graduated as African-Americans. Fernandez is a perfect conduit to Garrett's informal and amiable style. A.B. © AudioFile 2020, Portland, Maine [Published: APRIL 2020]