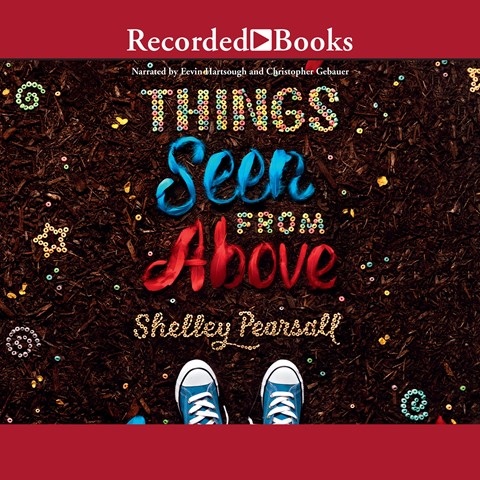 THINGS SEEN FROM ABOVE

Eevin Hartsough and Christopher Gebauer portray the alternating viewpoints of sixth-grader April and fourth-grader Joey in this uplifting story of nonconformity and friendship. April volunteers to be a Buddy Bench monitor for the fourth-grade recess rather than face social awkwardness in the sixth-grade cafeteria. Joey spends recess alone, walking in circles, dragging his feet, and lying on the ground. April and her co-volunteer, Veena, worry about the strange boy until they discover he is actually creating detailed designs meant to be seen from above. Each narrator provides a sympathetic portrayal that celebrates the diverse characteristics of the kids as they come together: April's empathy and intelligence, Joey's dreamy inward focus, and Veena's timidness as a new Indian immigrant. S.C. © AudioFile 2020, Portland, Maine [Published: JUNE 2020]