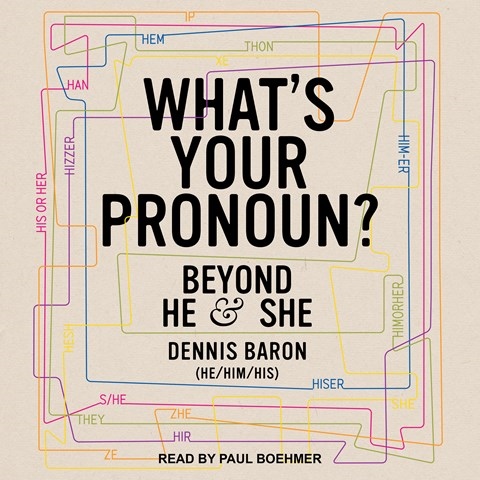 WHAT'S YOUR PRONOUN? Beyond He and She

Narrator Paul Boehmer steadily narrates Dennis Baron's primer on the history of pronoun use in the English language. The absence of a gender-neutral singular pronoun has irked some language purists for ages, and has been the focus of many a political debate. This audiobook reviews the history of the use of the universal masculine "he," "he or she," the universal feminine "she," and the many attempts of linguists, feminists, and gender-expanding folks to coin singular gender-neutral pronouns and bring them into wider usage. Ultimately, the audiobook stays out of the politics and concludes that people who want to die on the hill of a singular "they" being "wrong" are ignoring the fact that language always has and always will change with usage. Admittedly, it's amusing to hear a male narrator talk about "mansplaining," but Boehmer is engaged and delivers a great listen. S.N. © AudioFile 2020, Portland, Maine [Published: FEBRUARY 2020]