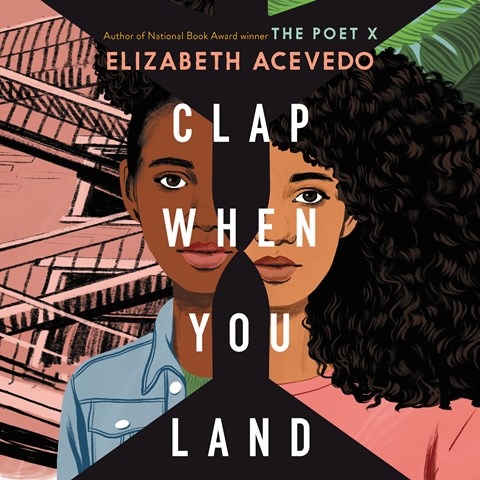 CLAP WHEN YOU LAND

Melania-Luisa Marte narrates the first-person free verse of Camino, the Dominican daughter of a man who has died in a plane crash. Elizabeth Acevedo delivers the alternating verses of his other daughter, Yahaira, who lives in New York. Neither sister knows the other exists until their father's death. Marte's narration captures the lyricism of a young woman who assists her aunt, a healer; dreams of going to medical school; and avoids a dangerous local man. Acevedo's portrayal of Yahaira is strong and passionate, depicting the logical mind of a chess player and the anger she has hidden since learning of her father's second marriage. Both narrators create a beautiful duet of the girls' raw and lingering grief, forgiveness of their beloved and imperfect father, and nascent sisterhood. S.W. Winner of AudioFile Earphones Award © AudioFile 2020, Portland, Maine [Published: APRIL 2020]