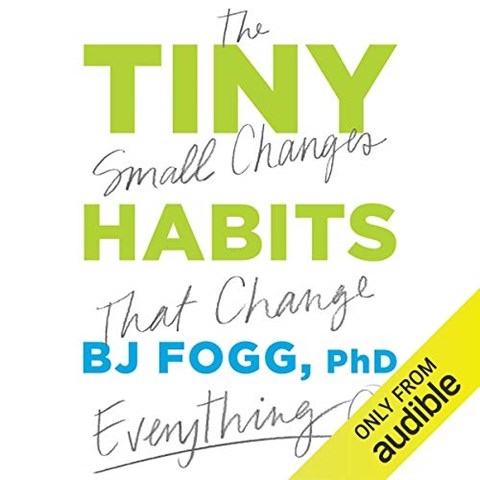 TINY HABITS The Small Changes That Change Everything

BJ Fogg starts off by addressing an issue with this audiobook: his voice. He's the first to tell you it's high and that it's taken a lot of practice to get it lower than it used to be. The Stanford researcher and behavioral scientist uses this example to encourage listeners to make changes by taking a lot of baby steps to make change fit into their lives. Fogg injects humor into his examples, including describing his own plan to floss just one tooth to ease into the habit of flossing. Later on, he has a lot of fun recounting stories of the sabotage he's seen people run into when making improvements. Throughout, he explains concepts such as motivation and reward, so listeners can work on their own changes. J.A.S. © AudioFile 2020, Portland, Maine [Published: FEBRUARY 2020]