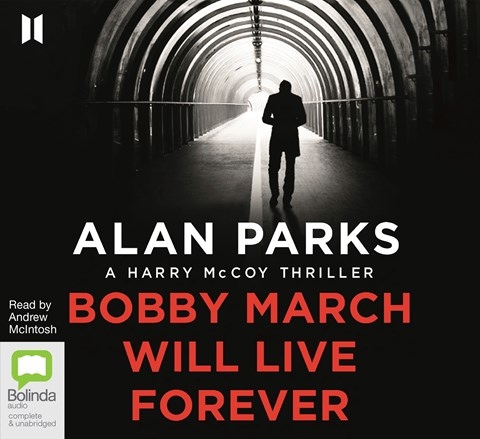 Andrew Mcintosh's narration suits the mood of this detective novel, set in Glasgow in 1973. A Scottish rock star is found dead in his motel room at the same time that a 15-year-old girl is reported missing. Are the events connected and can down-and-out police detective Harry McCoy put the pieces together? Be warned, this is not an easy listen. Mcintosh speaks with a thick Scottish brogue, making many words difficult to comprehend--and he says "wee" an awful lot. In one section he talks about a tea set, but it sounds like "T-shirt." Toss in frequent Scottish colloquialisms, many dealing with drinking, and Americans may be confused. That aside, this is an intriguing look at life in a place where the police consort with crime bosses, drink constantly, and occasionally get police work done. M.S. © AudioFile 2020, Portland, Maine [Published: JUNE 2020]