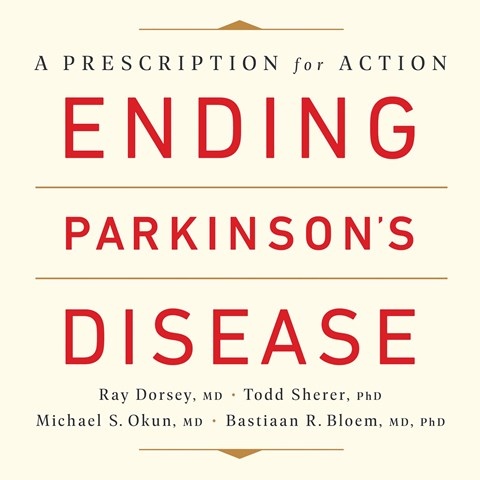 In a matter-of-fact newscaster-style delivery, narrator Alex Hyde-White begins this audiobook with some startling statistics: From 1990 to 2015, the number of those with Parkinson's disease doubled to 6.3 million, and by 2040, it's expected to double again, making Parkinson's the world's fastest-growing neurological disorder. Considering that the disease was virtually unknown until the early nineteenth century and that the primary medication (levodopa) was discovered more than 50 years ago and little progress has been made on a cure, you might wonder how realistic the audiobook's title is. But in a clear, practical response--enhanced by Hyde-White's engaging narration--the authors lay out an approach that could save millions from this dark diagnosis. This audiobook is highly recommended for patients, their families, and their friends, as well as anyone seeking a template for defeating epidemics and diseases. R.W.S. © AudioFile 2020, Portland, Maine [Published: JUNE 2020]