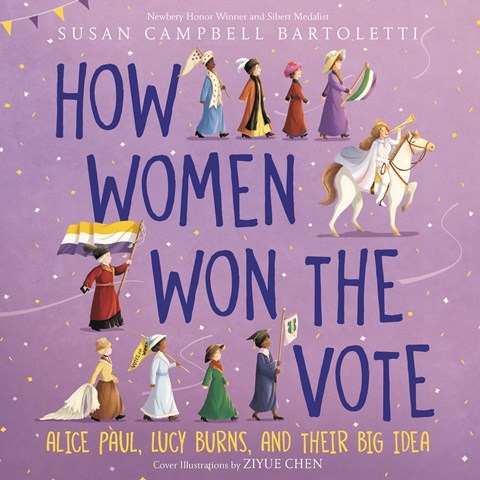 HOW WOMEN WON THE VOTE Alice Paul, Lucy Burns, and Their Big Idea

Patriotic fife and drum music introduces young listeners to this account of how suffragettes Alice Paul and Lucy Burns joined forces to help women win the vote. Sandy Rustin conveys their bitter, sometimes violent story in a mild-mannered voice that belies the women's radical rebelliousness. Beginning with their first meeting in England in 1909, and moving to the 1913 parade in Washington, and finally to the 1920 presidential election, when women were able to vote for the first time, this well-researched audiobook documents the long, difficult victory for the women who endured arrests, prison time, and hunger strikes in order to achieve their goal. But the lack of sensationalism in Rustin's voice clearly demonstrates that the women were peaceful protesters, not "hysterical" or "unladylike," as deemed by their detractors. S.C. © AudioFile 2020, Portland, Maine [Published: JUNE 2020]