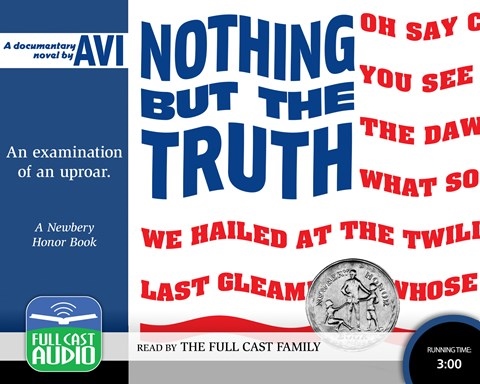 NOTHING BUT THE TRUTH

Avi's award-winning story about an act of rebellion gone awry is brought to life in this brief but powerful audio production. Mikey Mousaw portrays Philip Malloy, a ninth grader who has nonchalant and naïve tones except when he's talking about track (which he loves) or Ms. Narwin (whom he despises). When Phil openly disrupts Ms. Narwin's class in an attempt to be transferred out of her homeroom, the ever patient teacher--portrayed by Katie Gibson--has her honesty and intentions called into question by Phil's parents, portrayed by Carmen Crafts and Mark Austen, and other school superiors. This expertly narrated full-cast performance will keep listeners engaged until the misunderstanding finally comes to a head and the truth is revealed. V.T. © AudioFile 2020, Portland, Maine [Published: JULY 2020]