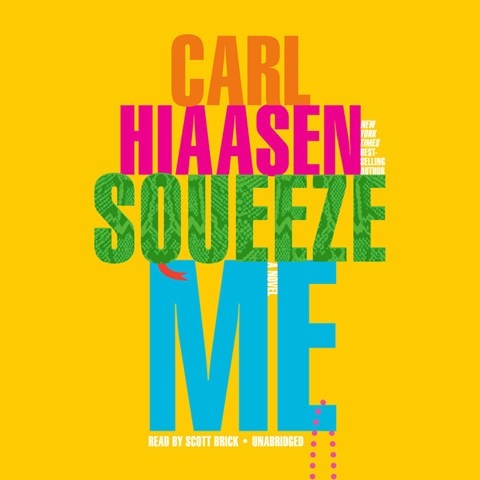 Scott Brick narrates Carl Hiaasen's latest audiobook, a crime farce that takes sharp satirical aim at Donald Trump and other wealthy conservatives. Kiki Pew Fitzsimmons, Palm Beach resident and member of an influential Trump-supporting cabal, goes missing at a swanky fundraiser. Soon after, professional wildlife wrangler Angie Armstrong is called to the scene to remove a Burmese python that recently ate a massive meal. Before being examined, the dead snake is stolen from Angie's apartment by someone keen on hiding any details about the Fitzsimmons disappearance. Brick offers an array of unique voices for the interesting characters who navigate the ensuing intrigue and inept politicking. He excels at developing irresistible salt-of-the-earth personalities like Angie's while also lampooning the 45th president and his affluent Florida cronies. A.T.N. Winner of AudioFile Earphones Award © AudioFile 2020, Portland, Maine [Published: AUGUST 2020]