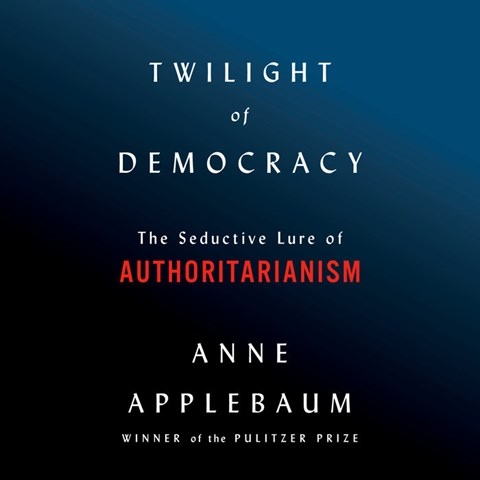 TWILIGHT OF DEMOCRACY The Seductive Lure of Authoritarianism

Anne Applebaum's matter-of-fact tone and knowledgeable delivery make this an informative listen. Applebaum draws in listeners by beginning with a personal story that sets a conversational tone. She describes a New Year's Eve party in December 1999 and quickly describes the remarkable shift in relationships--personal and political--that have occurred since. Using Poland as a starting point, Applebaum meticulously explains the rise of authoritarianism and nationalism and the ways that it has impacted the U.S. and Europe--historically and in the present day. Most importantly, Applebaum infuses a sense of urgency into her delivery as she illustrates the importance of recognizing the fragility of democracy and the ways that history can repeat itself to the detriment of society. K.S.M. © AudioFile 2020, Portland, Maine [Published: DECEMBER 2020]