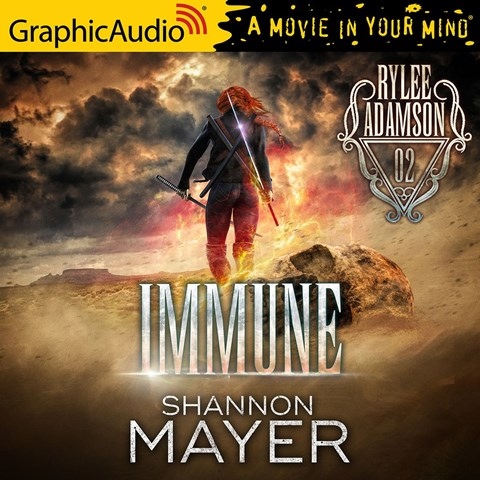 by Shannon Mayer | Read by Nora Achrati, Chris Genebach, and a Full Cast

Narrator Nora Achrati uses a gruff voice to inhabit the no-nonsense personality of Rylee Adamson, a determined tracker of missing people and paranormal creatures. Rylee and her werewolf, Alex, go looking for a missing child and the creature who abused her shaman friend, Louise. They are joined by FBI Agent O'Shea, portrayed by stony-voiced Chris Genebach. The agent doesn't flinch when he encounters the supernatural. The full cast of narrators adds dimensionality to the characters. Bradley Smith makes Alex sound like a submissive yet dangerous werewolf, and David Jourdan portrays Rylee's friend Dox, a quivery-voiced seven-foot ogre who's been seriously injured. Background music contrasts with the sound effects of ferocious fights that accompany the search for dangerous demons. M.B.K. © AudioFile 2020, Portland, Maine [Published: DECEMBER 2020]