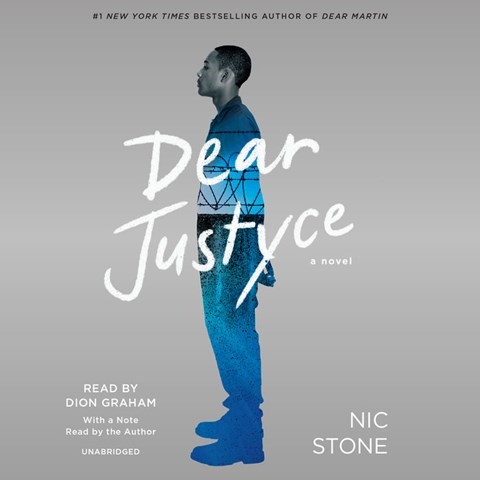 Nic Stone narrates powerful author's notes that frame her story and tell of her inspiration--teens without the opportunities that her first book's hero, Justyce, had. Dion Graham delivers first-person letters and the raw third-person story of 16-year-old Quan, who is wrongly incarcerated in a juvenile detention center. Quan and Justyce bonded as boys when Quan still hoped for a brighter future even though his father was in jail, his mother was being abused, and he himself had to care for his younger siblings. His letters to Justyce, who is attending college at Yale, finally provoke a legal response and results. Graham reads the letters with a mix of jive, envy, and caring. In the narrative he captures Quan's plight in an unjust legal system--and the brightness and wit that thrive when he finds support. S.W. Winner of AudioFile Earphones Award © AudioFile 2020, Portland, Maine [Published: SEPTEMBER 2020]