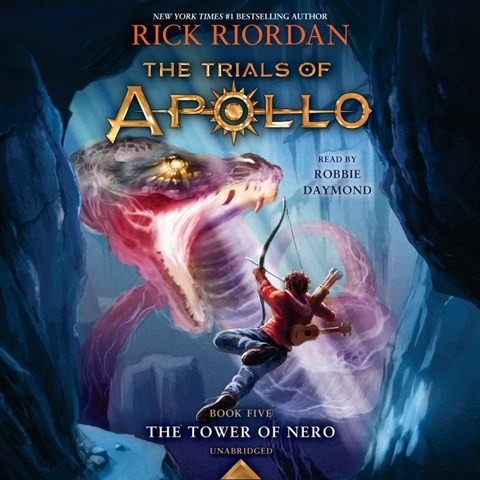 THE TOWER OF NERO Trials of Apollo, Book 5

Rick Riordan's epic Trials of Apollo series comes to an end with this fifth and final installment. Narrator Robbie Daymond has been the smug, funny, and entirely convincing voice of Greek god Apollo from the very beginning. As Apollo, Meg, and their friends return to New York after a cross-country road trip and prepare to wage their final battles against baddies Nero and Python, Daymond is in perfect step with all of the action and emotion. He adds squeaks and pops to his repertoire for the language of the underground troglodytes and gives voice to a large cast of characters both familiar and new, but as always, Apollo's journey is at the heart of the story, and Daymond is that heart. Will they prevail, and will Apollo become his godly self again? Listen and find out. J.M.D. Winner of AudioFile Earphones Award © AudioFile 2020, Portland, Maine [Published: NOVEMBER 2020]