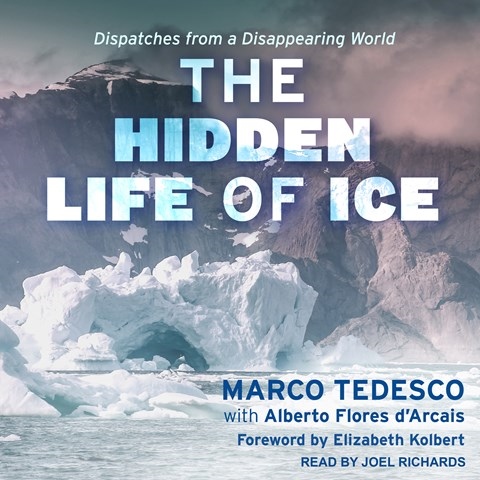 THE HIDDEN LIFE OF ICE Dispatches from a Disappearing World

Narrator Joel Richards admirably handles the complex task of emulating the reverential voice of climate scientist Tedesco as he navigates the vastness of ice-covered Greenland. Read in an almost hushed tone, his nuanced narration reveals the exquisite silences, freezing temperatures, and harsh winds of one of the planet's largest remaining arctic expanses. Richards smoothly vocalizes this audiobook, by turns paean to solitude, primer on global warming, and compendium of close scientific observations. Author Tedesco witnesses the disappearance of a lake into the ice, worries how warmer temperatures will bring about arctic tourism, and frets over a China-sponsored new Silk Road to connect with Europe. This fine, if brief, audiobook illuminates the lifework of scientists performing experiments, eating, and sleeping in very cold country. A.D.M. © AudioFile 2020, Portland, Maine [Published: OCTOBER 2020]