Home»Reviews»WHEN NO ONE IS WATCHING 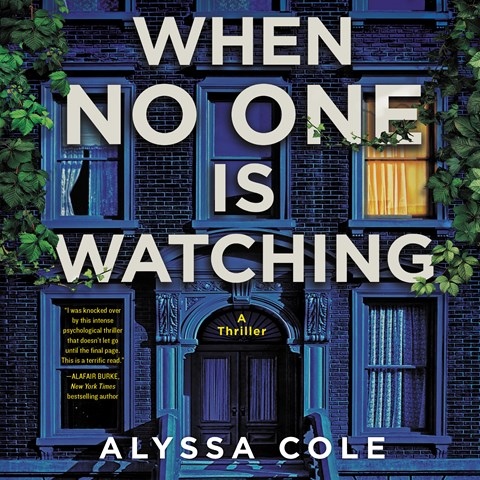 WHEN NO ONE IS WATCHING

Susan Dalian's and Jay Aaseng's skilled vocal ranges complement witty prose and a plot that cleverly dramatizes racial injustices. Sydney creates a walking tour to retain her Brooklyn neighborhood's history during an unsettlingly fast gentrification. When new neighbor Theo joins the effort, and the pair uncover horrors that are more than historical, they're catapulted into a state of fear. Dalian seamlessly switches between opposing personalities: the entitled new residents and the salt-of-the-earth characters who have lived in the neighborhood for decades. In one scene, newly settled Kim screeches her threat to call the cops when longtime resident Sydney calmly asserts her place in a bodega line. The other narrator, Aaseng, cheerily shouts, "I've got beer!" to diffuse a confrontation, delivers a Caribbean accent, and voices female characters realistically. Listeners will be gripped by the performance and the story. A.L.C. © AudioFile 2020, Portland, Maine [Published: OCTOBER 2020]