Home»Reviews»THE EYES OF THE QUEEN 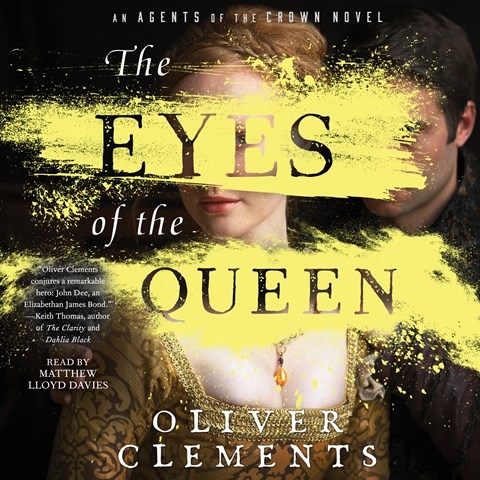 THE EYES OF THE QUEEN Agents of the Crown, Book 1

Matthew Lloyd Davies narrates the first Agents of the Crown series with subtlety and intelligence. It’s 1572. The rivalry between Elizabeth I and Mary, Queen of Scots, has reached the boiling point. Elizabeth’s treasury is devastated, her army is decimated, and the Spanish are pressing for Catholic Mary to replace her Protestant cousin on the throne. Tension mounts after the queen’s spymaster, Francis Walsingham, loses a secret document that could change the balance of power in Europe. Walsingham appeals to John Dee, a scholar and cryptologist, to locate and decode the document. Lloyd Davies masterfully moves Dee through double-dealing opponents, treachery, and graphic violence in this well-researched historical fiction. Lloyd Davies’s clear diction, tone, and attitude reflect both period and situation. S.J.H. © AudioFile 2020, Portland, Maine [Published: DECEMBER 2020]