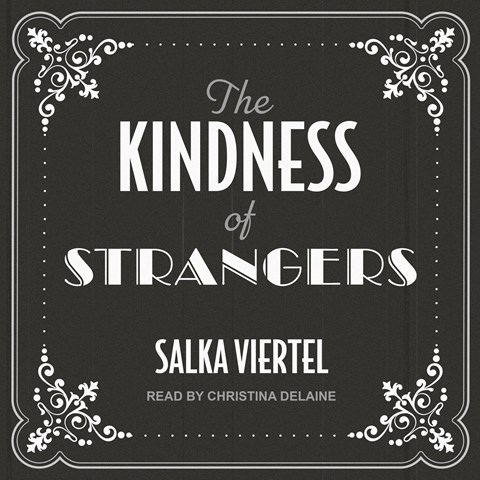 THE KINDNESS OF STRANGERS

Christina Delaine provides a remarkable narration of actress/screenwriter Salka Viertel's autobiography. Using an impeccable Polish accent with never a slip, Delaine provides a first-person account of a woman whose life touched the lives of authors, actors, musicians, stage directors, and composers. Born to well-off parents in Galicia (part of the Austro-Hungarian Empire), Salka was molded into an unstoppable force in her early years. Enjoying modest fame during the dark days of the twentieth century before and between the wars, Salka befriended the famous and infamous. Whether delivering anecdotes about Kafka, Rilke, Bernhardt, or Garbo, Delaine resonates with Salka's humanity and determination to succeed. Salka's positive effect on the arts is hardly remembered today, but thanks to Delaine's convincing presentation, her life story becomes fascinating listening. S.J.H. Winner of AudioFile Earphones Award © AudioFile 2021, Portland, Maine [Published: JANUARY 2021]