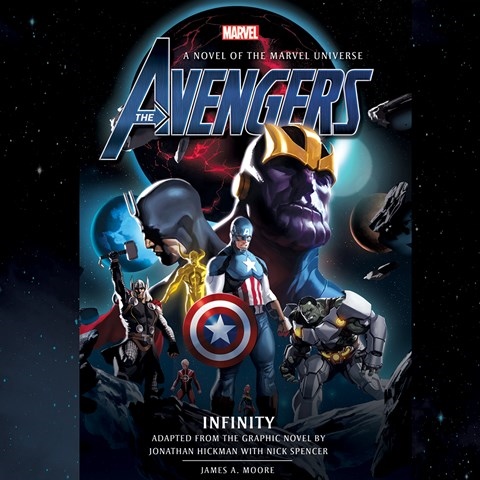 by James A. Moore | Read by Dion Graham

Narrator Dion Graham takes a complex story involving Earth's premiere superhero team, the Avengers, and gives each character--from the alien space gods to good old Captain America--a distinctive voice. The work takes the most complex Avengers storyline in a decade and combines it with a new one involving Thanos, making them both understandable. This is an edge-of-your-seat story about an ancient alien race that has decided Earth's universe should be destroyed. Only the Avengers and the armies from a hundred worlds can hope to stop them. And--as if that were not enough--the evil Thanos takes the opportunity to attack Earth. The audiobook is wall-to-wall excitement for comic and movie fans alike. Comic fans will appreciate how the author has trimmed down the original story from the overly complex original series. M.S. © AudioFile 2021, Portland, Maine [Published: JANUARY 2021]