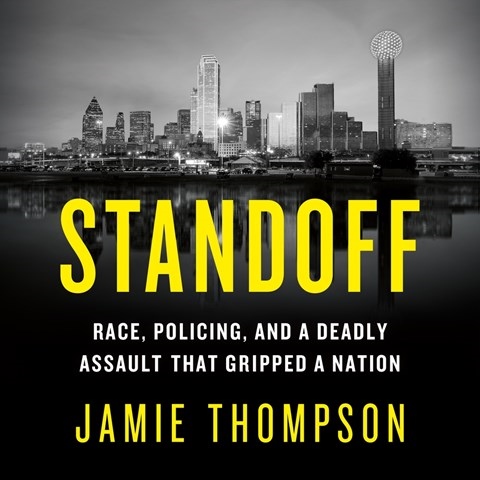 STANDOFF Race, Policing, and a Deadly Assault That Gripped a Nation

This audiobook is fueled by the awesome combination of a compelling story, good writing, and a captivating narration. The story is true: On July 7, 2016, a gunman shot and killed five Dallas police officers and wounded several others during protests against police brutality. Jamie Thompson empathetically looks at the day from the points of view of several participants, including individual police officers and protesters. The deep-voiced JD Jackson presents the very different beliefs of the characters with understanding and respect. His performance is nicely paced and steady, a style that somehow adds to the tension. In a short audio note, the author says she hopes that listeners will be able to step into the shoes of the people portrayed. Jackson's excellent performance makes that easier. G.S. © AudioFile 2020, Portland, Maine [Published: NOVEMBER 2020]