Home»Reviews»LIGHT FOR THE WORLD TO SEE 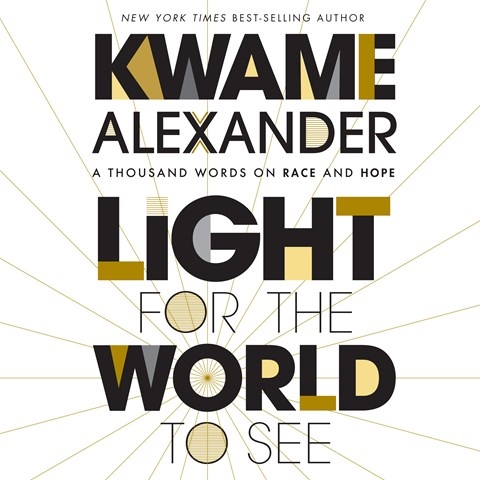 In this audiobook, Kwame Alexander delivers three of his poems about the struggles of Black Americans. He begins with a stirring foreword in which he remembers a time in November 1978 when his father--also his school principal-- brought the entire student body out to protest the police killing of Arthur Miller in Brooklyn. Alexander recounts his fear of police violence and the power he felt through communal protest and song. His three wonderfully performed poems--"American Bullet Points," "Take a Knee," and "The Undefeated"--are a potent combination of elegy, protest, and celebration of Black triumph. Listeners should see the print edition for its striking visual elements. And listen to the audiobook for Alexander's incredibly powerful performance set to original music. A.T.N. Winner of AudioFile Earphones Award © AudioFile 2020, Portland, Maine [Published: DECEMBER 2020]