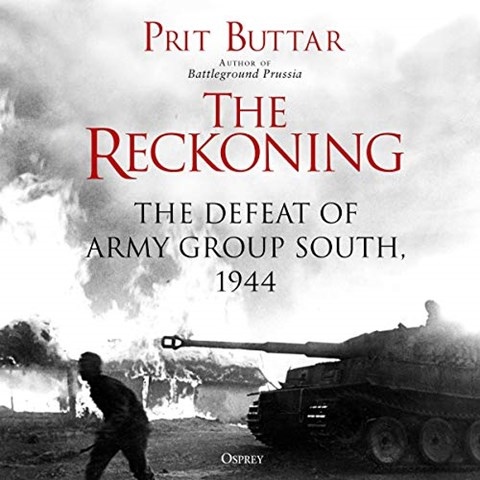 THE RECKONING The Defeat of Army Group South, 1944

Richard Trinder gives an able and engaging narration of this long, detailed account of the defeat of Germany's Army Group South in the former Soviet Union and Romania in 1944. Buttar's account of this epic struggle, which involved millions, provides new insights into what happened and demolishes the view of the Soviet Army as a huge mass that merely overwhelmed the German Army by sheer numbers. The author ably relates not only the broad view of large formation commanders, but also the view of the common soldier. Trinder has a stentorian voice that is quite clear and easily understood. He moves at an easy-to-follow pace and uses a Russian or German accent as appropriate for each quote. For those who can put in the time, this will not disappoint. M.T.F. © AudioFile 2020, Portland, Maine [Published: DECEMBER 2020]