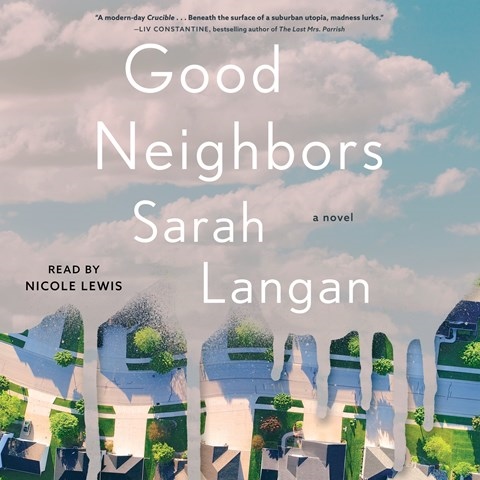 Narrator Nicole Lewis delivers great dialogue voices, including convincing Brooklyn accents for protagonists Gertie and Arlo Wilde and their kids, Julia and Larry. Lewis also expressively performs the narrative. The Wildes move into a house on Long Island's Maple Street, where Gertie becomes friends with Rhea Schroeder, who has many secrets. After drinking too much one evening, Rhea reveals too much to Gertie, regrets it, turns against her friend, and helps neighbors do likewise. This is a story of broken friendships, a sinkhole, a missing child, lies, and whispers. It is funny, tragic, and compelling. Lewis captures the essence of the adults and children of Maple Street, and even the neighborhood itself. An outstanding performance. G.S. © AudioFile 2021, Portland, Maine [Published: MARCH 2021]