Home»Reviews»THE MYSTERIOUS DISAPPEARANCE OF AIDAN S. (AS TOLD TO HIS BROTHER) 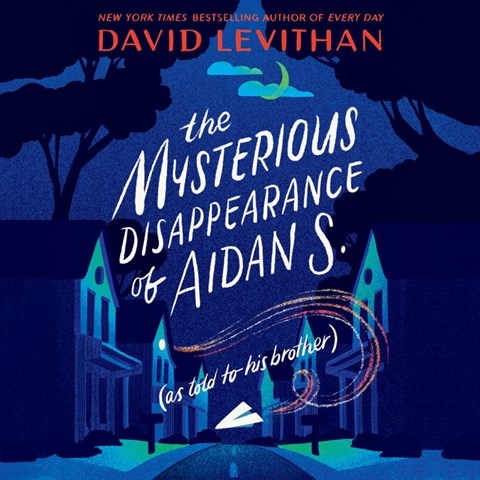 THE MYSTERIOUS DISAPPEARANCE OF AIDAN S. (AS TOLD TO HIS BROTHER)

Narrator Everette Plen sets the tone of brotherly concern and suspicion that underpins this unusual take on fantasy. For six terrifying days Lucas's parents and the police searched for his older brother, who disappeared from their home without a trace. More mysterious is his reappearance in the attic, still in his pajamas, with a blue leaf in his hair. Aidan says he visited a magical world, Aveinieu but then stops giving details when he's met with disbelief and thinly veiled anger. Plen's youthful voice embodies Lucas, the bookish 11-year-old who tries to draw out Aidan's true story, in light of past brotherly pranks. Plen's gentle portrayal of Lucas makes the listener care more about the fallout of Aidan's trip than the sparse magical details. S.T.C. © AudioFile 2021, Portland, Maine [Published: FEBRUARY 2021]