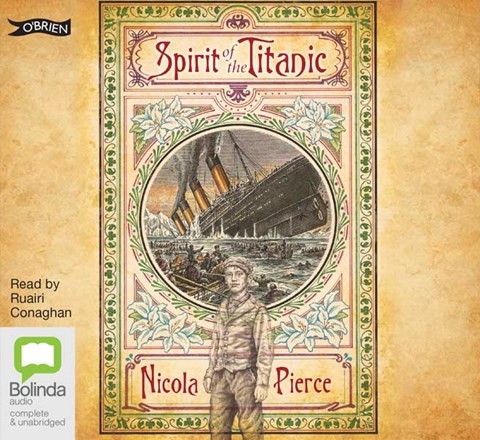 SPIRIT OF THE TITANIC

Irish actor Ruairi Conaghan's narration enhances this captivating story of the TITANIC. The clever twist to this well-crafted version is its protagonist, 15-year-old Samuel Scott, who lost his life while working on the vessel's construction. Samuel's ghost moves unseen among his colleagues on Belfast's docks and among the passengers and crew of his beloved ship during her maiden voyage. He recounts what he observes and senses about people's thoughts and feelings, interweaving them with personal reflections and memories. Employing an array of accents and intonations, Conaghan captures the extensive cast. He voices their hopes and anxieties, grief and courage with heartrending emotions as the inconceivable disaster unfolds. The author's notes, also narrated by Conaghan, provide additional facts and details. S.A.A. Winner of AudioFile Earphones Award © AudioFile 2021, Portland, Maine [Published: APRIL 2021]