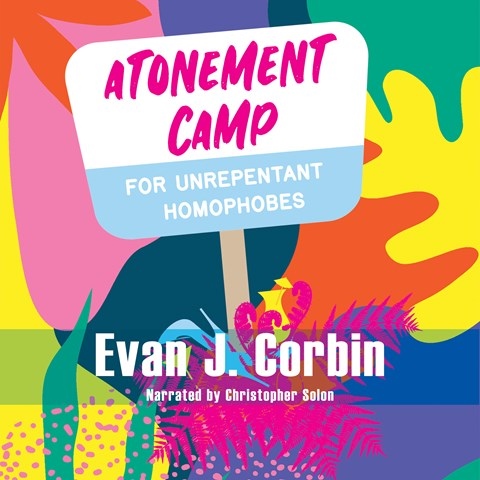 In this novel, a new translation of the Bible reveals that Jesus condemned homophobia. Narrator Christopher Solon conveys the responses of characters who oppose homosexuality and those who rejoice at the news. Listeners meet 27-year-old North Carolina pastor Rick Harris, who ministers to his congregation in a fire-and-brimstone style. After he preaches against the new scripture, church elders force him to attend Atonement Camp--or lose his job. Solon flawlessly delivers Harris's strong Southern accent and naïve personality. Solon also shines while describing the camp, which is run by drag queens who spout hilarious double entendres. Most moving are flashbacks revealing a teenage Harris's heartbreaking gay encounter and his father's cruelty. Inspiring conversations about love for others and embracing oneself enhance this entertaining satire. S.G.B. © AudioFile 2021, Portland, Maine [Published: MARCH 2021]