Home»Reviews»THE GRAVITY OF US: AFTER THE LAUNCH 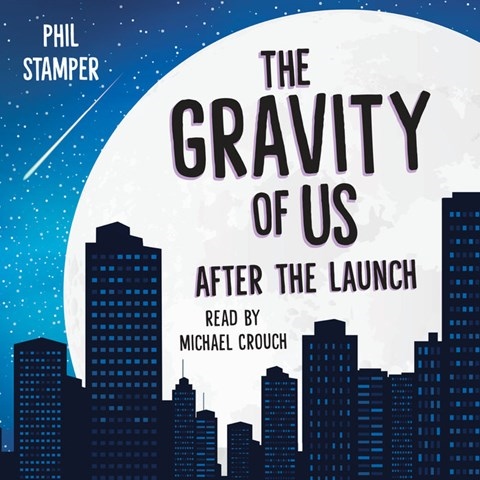 THE GRAVITY OF US: AFTER THE LAUNCH

One year after an abrupt move to Texas for a life-changing NASA mission, 18-year-old social media reporter Cal Lewis is back on his home turf in New York City, playing tour guide for his boyfriend, Leon. Narrator Michael Crouch wears Cal's signature edgy tenor like a comfortable jacket. As portrayed by Crouch, Leon, starstruck by the sights and sounds of the Big Apple, maintains a warm, rich tone. This makes for a delightful contrast with the bright and bubbly enthusiasm of Deb, Cal's longtime best friend and former girlfriend, whom Leon is meeting for the first time. Wistfully, the trio reflect over vegan pizza, a successful launch to Mars, the takedown of the oppressive StarWatch TV network, and their own personal metamorphoses. A splendid coda to a love story blooming in adversity. E.E. © AudioFile 2021, Portland, Maine [Published: MAY 2021]