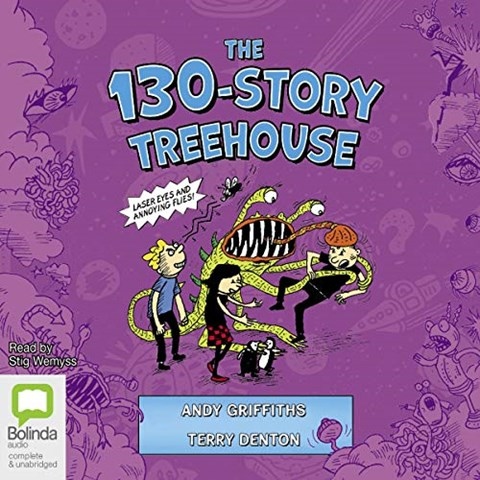 Stig Wemyss's outstanding narration, accompanied by awesome sound effects and ambient music, animates the crazy antics in this tenth audiobook of the beloved Australian series. Treehouse residents Andy and Terry, and their friend, Jill, introduce listeners to 13 fantastic new levels of the treehouse--including a soap-bubble blaster, a time-wasting level, and a toilet paper factory. There are now 130 stories of absolute madness, where imaginations go bonkers and anything can happen! In this installment, the friends are abducted by a UFE (Unidentified Flying Eyeball) that blasts the treehouse into outer space for an intergalactic death battle. Wemyss's outstanding vocalizations and all the production values are wildly entertaining. For additional wackiness (or multisensory overload), listen while enjoying Terry Denton's zany book illustrations. S.A.A Winner of AudioFile Earphones Award © AudioFile 2021, Portland, Maine [Published: OCTOBER 2021]