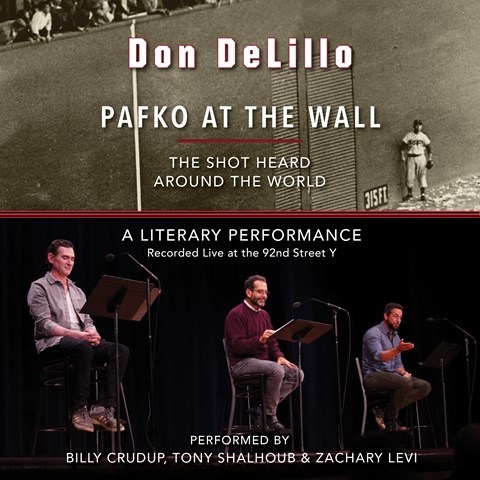 PAFKO AT THE WALL The Shot Heard Around the World

One couldn't imagine three more American-sounding voices than Billy Crudup's, Zachary Levi's, and Tony Shalhoub's as they recount one of the most iconic events in American sports history--Bobby Thomson's clutch home run that won the National League pennant for the New York Giants in the bottom of the ninth on October 3, 1951. Our trio captures all the nostalgia, gentle satire, and historic reimaginings of Don DeLillo's beloved work, originally published in 1997 and recorded live at the 92nd Street Y in 2019. Somehow famed entertainers Jackie Gleason and Frank Sinatra are sitting in the same box seats as FBI director J. Edgar Hoover. All are eating hot dogs, trading quips, and losing hope until suddenly they witness "the shot heard 'round the world." B.P. © AudioFile 2021, Portland, Maine [Published: JUNE 2021]