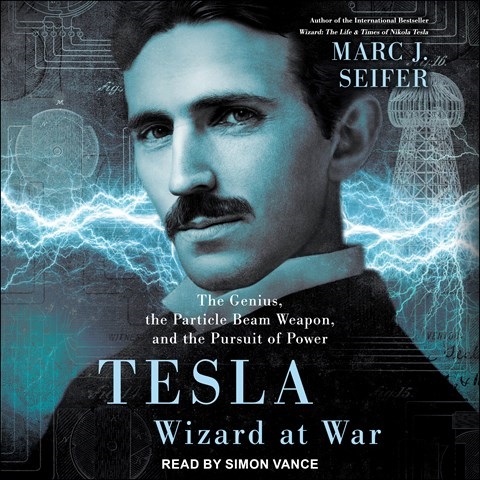 TESLA Wizard at War: The Genius, the Particle Beam Weapon, and the Pursuit of Power

The lad who grabbed the microphone at age 6 to record Pooh, Simon Vance, grew into a narrator who has, so far, won 16 Audies. His precise diction, with just a wisp of Oxbridge, here resurrects a forgotten genius. Nicola Tesla may not have been the most significant inventor of his time, but he was certainly the most colorful. Regarded as a saint in India, the Serbian's proposed death ray gave him the part of a mad scientist in the first-ever Superman comic. His impecunious death and association with the occult led to Tesla's public neglect--at least until Elon Musk bought the car company that bears his name. Vance gives this enthralling biography the touch of fustian pomp appropriate to a dandy who lived at the Waldorf Astoria. B.H.C. © AudioFile 2021, Portland, Maine [Published: AUGUST 2021]