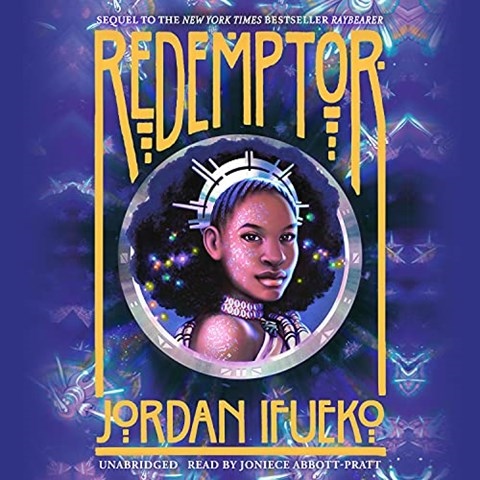 Joniece Abbott-Pratt makes a triumphant return to narrate this thrilling sequel to RAYBEARER. Tarisai is now empress of Aritsar, and reckoning with its disturbing legacy. She faces daunting tasks--first, to anoint a council of rulers and, then, to enter the Underworld to end the centuries-long practice of sacrificing children to appease its malevolent spirits. But Tarisai is haunted by those dead children, and listeners can hear her fear, guilt, and despair as their disturbing whispering voices urge her to do more to seek justice for their deaths. Tarisai's strength and the love of her friends shine through in Abbott-Pratt's compelling narration, which captures each character's spirit. Listening to the audiobook provides an added bonus: Abbott-Pratt's warm voice singing the many chants and songs woven throughout. E.E.C. Winner of AudioFile Earphones Award © AudioFile 2021, Portland, Maine [Published: SEPTEMBER 2021]