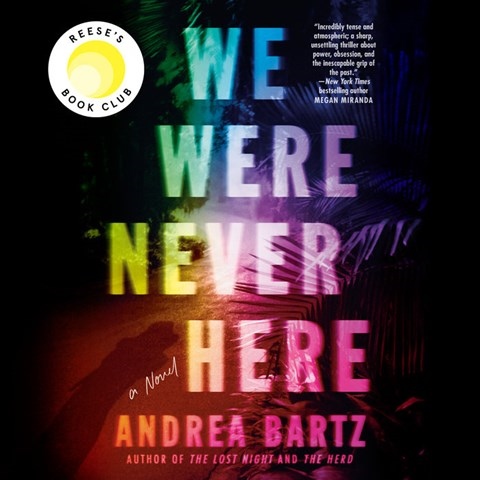 WE WERE NEVER HERE

Kristen and Emily are such best friends they'd bury a body for each other--literally. Narrator Becca Tobin's nuanced performance captures the friends' bond and their opposite personalities. Despite the traumatic events of last year's trip with Kristen--when a backpacker wound up dead--Emily is excited to embark on another trip with her friend. On their last night in Chile, Emily returns to their hotel room to find another backpacker dead and Kristen once again claiming self-defense. But how could this happen twice? Tobin uses a playful voice for confident Kristen, whose voice remains cheery in the days after the bloody killing--to chilling effect. For Emily, whose voice often wobbles with tears, Tobin uses a softer tone. As Emily worries about their cover-ups, Kristen keeps her close, causing Emily to question . . . everything. A.L.C. © AudioFile 2021, Portland, Maine [Published: SEPTEMBER 2021]